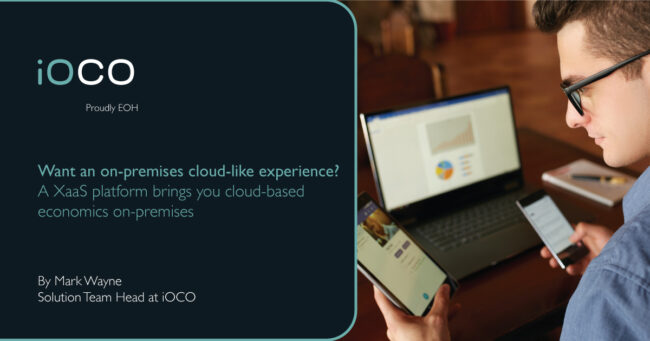 The most annoying thing about IT is that there is no single version of the truth. Usually, the form is defined by the function, but the cloud hype drummed up by the global marketing thrust of the hyperscalers has turned this concept on its head.

Instead of business driving technology, technology is trying to drive business. It becomes a case of the tail wagging the dog.  I think that’s fundamentally flawed. Few transformational technologies have generated as much hype and confusion as the cloud. And many companies have learned the hard way that cloud is not a silver bullet and there is no one size fits all.

Yet, the appeal that is driving cloud adoption and everything-as-a-service (XaaS) is the value proposition of its financial and consumption-based model. Without having to commit to specific financial, infrastructure and software lifecycles, cloud adoption is, in fact, cheaper compared to on-premises hardware. Thus, XaaS has become the new way to consume IT.

However, many organisations are finding that while cloud migration brings a lot of returns and benefits in the long run, getting there is usually very expensive and time-consuming. We know that the world’s largest enterprises either have a cloud strategy, or are on trajectories into the cloud, on average only about 50% of their workloads are actually in the cloud.

This is mainly due to challenges around cost containment and skills, as well as compliance, governance and security. Because you’re moving to cloud, you have to reinvent your compliance, governance and security framework. So yes, while everyone has a cloud strategy with the hyperscalers, or is eyeing to go that route, the benefits are not always attainable in the short term, especially if you are an enterprise customer.

So why should we consider an as-a-service model outside the public cloud? Quite simply put, an edge-to-cloud platform, like HPE GreenLake, allows you to have cloud-based economics on-premises. Another huge plus is that organisations do not have to reinvent the wheel, as they can typically stay within their current toolsets and operational processes, meaning that they get the benefits of local operational efficiency at cloud-based economics.

So, an on-premises cloud-like experience sounds good, doesn’t it? But let’s delve into the pricing model. I’ve heard it said that there is but a marginal difference between renting or leasing and an on-premises XaaS model. I can assure you, they’re vastly different. It’s not a rental and it’s not a lease, it is a pay-as-you use model. And the big advantage here is that the pricing is typically fixed for XaaS offerings for the duration of your contract. Also, because solutions such as HPE GreenLake are priced in local currency, you basically get a built-in hedge against currency fluctuations.

Also, many seem to think that the pricing model for a XaaS on-premises platform might be a bit different, but it’s actually quite the same as for cloud. So, while there is a committal period with XaaS that you don’t get with cloud, consider that if you go with pure pay-as-you-use in the cloud, you pay a premium. The price comes down the longer you commit for, so the XaaS committal period is really not unlike the cloud at all.

But we also have to acknowledge that the cost of money is very different for each and every enterprise. Sometimes, large companies are not averse to blowing R30 million on hardware rather than having to make any painful changes. Yet, there are many other organisations that don’t want the capital outlay. For instance, no start-up wants to outlay capital on IT, which makes it sweet a spot for the XaaS model on-premises, such as HPE GreenLake. What you want is for your as-a-service platform to grow as your organisation grows, and you definitely don’t want to provision for what may or may not happen upfront.

My strong recommendation is that when you’re doing due diligence, understand your business requirements first and by this, I mean the non-technology requirements. This must include aspects such as compliance, governance standards, financial model and exchange rates. In the end, I am confident that it will lead you to an as-a-service type model.