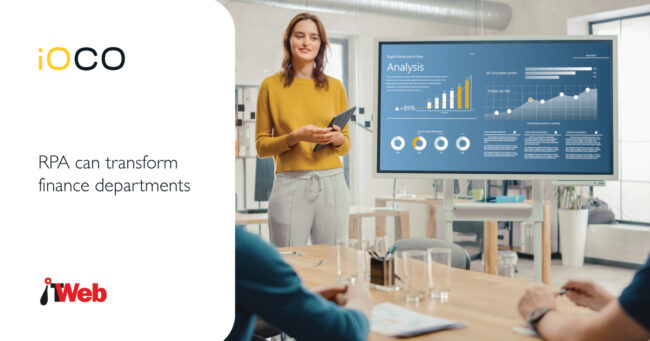 Robotic process automation can transform finance in manufacturing, enhancing customer and vendor experience, improving process efficiencies and productivity, reducing human error and delivering a 24/7 workforce and quick ROI with the right use.

This is according to Johan Du Preez, Business Development, Automation at iOCO, and Neil van Wyngaard, Business Unit Manager and Enterprise Architect at iOCO, who were speaking during a webinar hosted by iOCO and Automation Anywhere, in partnership with ITWeb.

Du Preez said there were still misconceptions about RPA: “Automation is not industrial robots, talking robots or a digital workforce that entirely replaces the human workforce. It is about better equipping staff.”

Du Preez said key drivers for automation included cost savings, risk reduction, governance and compliance and customer and supplier satisfaction. He said iOCO advised organisations to first identify what was required out of their automation initiative, then look at which use cases in the value chain supported those drivers, such as driving down debtor days in accounts receivable. “Only after we have identified the use cases and defined a business process to be automated, should they look at the technology,” he said. “After implementing automation, it is important to go back and measure the successes,” he added.

“Technology-wise, RPA can be quite a daunting environment. At iOCO, we make use of technology elements including system integration; computer vision to interpret documents, recognise objects and extract data; workflow automation coupled with RPA to execute tasks within a process; cognitive agents or digital personal assistants; and intelligent automation. When we put these technologies together, we really start driving intelligent automation.”

Van Wyngaard outlined a case study using Automation Anywhere IQ Bot on Syspro in a manufacturing firm’s accounts payable department, noting the project had achieved invoice automation of over 80%, with only 20% exceptions. The project had also reduced the number of admin clerks needed to manage accounts payable. “The staff were overwhelmed with work, but once RPA was brought in, they became concerned about job security and started ‘racing’ the bot. With proper change management, the staff not only accepted RPA, but enjoyed being redeployed to carry out higher value tasks,” he said.

RPA had improved throughput of invoices – sometimes with payment achieved in under 24 hours, he said. It had also improved efficiency, enforced business rules and supported the company’s digitisation journey. He noted, however, that RPA in accounts payable was not always a quick and easy process largely because of vendor invoices, which were often inconsistent, lacking information or using varied date formats. Change management among vendors supported successful RPA implementations, he added.