Skip to content
Home » Blog » Rethinking Applications in the Cloud 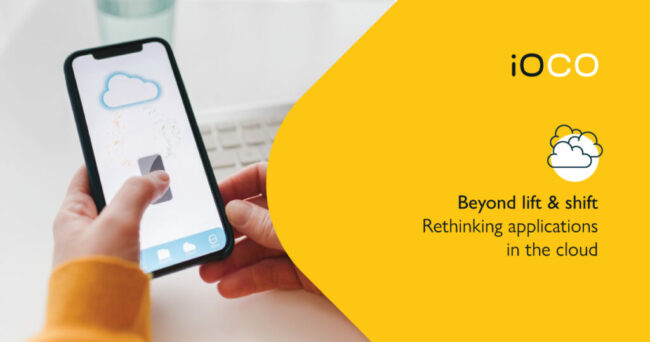 When companies consider the cloud, especially when in the early stages of cloud adoption, they tend to view it with an infrastructure lens. They see like-for-like servers, now hosted in the nebulous “nowhere” instead of in their buildings or in hard-linked data centres, and hopefully with infinite capacity for scaling. But that’s too often where their thought processes end.

Unfortunately for those companies, the infrastructure component is the mere tip of the iceberg.

The invisible (to many) elephant in the room is the software component. And to bring your software into the 21st century is not as simple as “Lift & Shift”. In fact, for many organisations, lift and shift to the cloud may not even be a viable option.

It’s fascinating to see how many companies’ core businesses are run on old, monolithic applications. Applications that are old enough to have been built on outdated or even obsolete technology, where documentation is lacking or non-existent, skills are hard to come by, and maintenance is, to put it mildly, a pain. This is the reason that Cobol consultants and alike command such a high hourly rate.

For these older, mission-critical applications to extend their lives, they need to be reborn through the crucible of app modernisation. Which yes, unfortunately, means a system rewrite. This is often a terrifying prospect for companies, but while the process can take time, it isn’t difficult to conceptualise:

Far from being something to fear, app modernisation is an opportunity to breathe new life into your core applications, with better user experience, faster response times, and improved compliance (e.g., to POPIA, GDPR, HIPAA etc.) and security. And the benefits are innumerable.

Put simply, rebuilding your app to be cloud-enabled lets you adapt quicker, grow faster, and deliver more value, more quickly than you have done before. It lets you take true advantage of the native services and availability, especially around data optimisation and management. To build for cloud is to build for automation – the continuous delivery of the DevOps processes, the automatic scaling for high performance when you need it, and operational cost savings when you don’t. Not to mention component re-use and built-in services that are available at a fraction of the cost of development.

In a world where the technology landscape is changing far faster than we can imagine, the only way to ensure that organisations stay relevant is for their applications to be ready to adapt at short notice. Which means modernising today, lest you be left behind tomorrow.