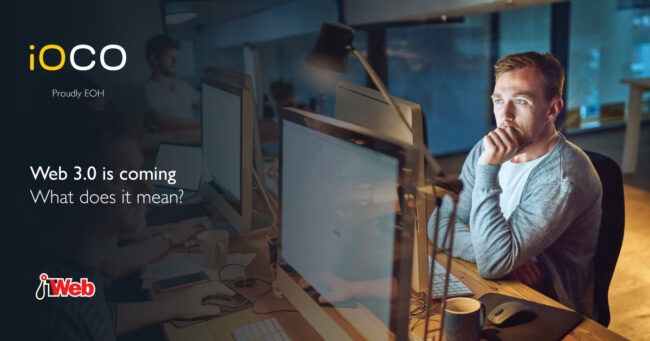 While nobody can be certain how it will impact business and individuals, the world needs to be getting ready for Web 3.0 – the next evolution of the internet.

This is according to experts taking part in a webinar hosted by iOCO in partnership with ITWeb last week, on what changes Web 3.0 are likely to bring.

Alex Pryor, divisional head of digital innovation at iOCO, said Web 3.0 essentially involves decentralisation. “Where Web 1.0 was basically static, Web 2.0 was about content and Web 3.0 is about read, write, own. Where it gets interesting is on the tech side of things, where we see distributed computing, computing at the edge, IoT, multiple nodes globally. We’re also talking transparency, blockchain and smart contracts, and immutable records. On the data side you’re talking the semantic web for a more meaningful experience. It’s evolving as we speak, and is fundamentally changing the experience of the internet.”

Said Pryor: “We don’t have a view of where it’s going to end up. Take for example the NFT business – right now it’s largely about art and might be seen as a fad, but it has the potential to revolutionise things. Another big one is going to be the metaverse – we don’t know yet whether it will be augmented reality, virtual office space, or a reality for us.”

Varsha Ramesar, cluster executive for data and analytics at iOCO, said a key change would be the ownership of data. “Corporates own our data right now, but in Web 3.0, individuals will own their data and are responsible for it. So companies will have to offer some sort of exchange of value to make individuals want to share this information.”

She noted that ownership of their own data would mean that individuals also had to take responsibility for protecting their own data.

Looking at potential downsides of Web 3.0, Ramesar said: “There could be challenges in the quality of data and potential biases in analytical modelling. We could have to bring in additional data points like biometrics so that people can properly identify themselves, and the validation database must exist somewhere.”

Conrad Steyn, CEO of iOCO Advisory, added: “In Web 1.0, the publisher was responsible for information quality. In Web 2.0 we saw more misinformation emerging. Now in a decentralised Web 3.0, who takes responsibility for the data? There could be data manipulation and misinformation,” he said.

Steyn said the evolving Web had the potential to disrupt even businesses seen as new and disruptive. “Look at Uber, for example. Their servers and software are owned by Uber and they take a cut as part of the fee. But now people want to get away from governance structures, so already some of the Uber drivers have said it’s not working for them and they are turning to blockchain to build a decentralised and democratised version of Uber. So even things we think are new could be fundamentally disrupted by Web 3.0.”

The panellists said that while Web 3.0 could bring with it unexpected developments, organisations had to be preparing themselves for it.

Paul Spagnoletti, digital and technology business executive at iOCO, said security and infrastructure had to be key priorities. “There’s a massive move to Platform as a Service (PaaS) as opposed to hosted. There are still limitations in hosted cloud, and it can’t scale as you can with PaaS. They will have to consider how to be profitable with data when they don’t own it anymore. And on the negative side, there are questions around how organisations handle data and privacy, and how to get clever about doing that.

But if organisations miss the opportunity and don’t prepare, they are going to miss out. It’s an exciting phase of the economy. The opportunities it presents are amazing,” he said.