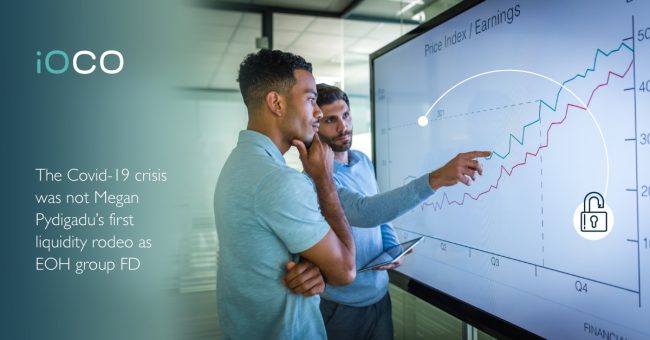 Covid-19 has resulted in a number of companies facing the challenge of crisis liquidity, but one CFO, this wasn’t her first rodeo. Megan Pydigadu, EOH group FD and 2021 CFO Awards nominee, began dealing with crisis liquidity even before the onset of Covid-19. In fact, unbeknownst to Megan, a crisis was already coming to a head just as she was joining the ICT solutions provider.

“I had different aspirations when I first joined EOH more than two years ago, about what I was coming there to do. I figured I was going to grow the ICT business and look forward. When I arrived, however, corruption was uncovered, the company had high levels of unsustainable debt and a balance sheet that required a significant clean up and I had to quickly get on top of that,” she explained.

This meant that over the past couple of years, Megan has been involved in a big clean-up exercise and working closely with the banks on liquidity issues in the wake of the scandal. As a result, some of the top learnings she has to share for ensuring liquidity during a crisis are around relationship management, governance, tightly managing working capital and doing the financial basics well.

“When I joined EOH two years ago there had been no cash flow forecasting in place and management of working capital was ad hoc. We had a large debtors book and we were paying suppliers randomly. We quickly put in place 13-week cash flow forecasts which we measured actual weekly cash flows against forecast on a weekly basis and moved to paying suppliers weekly as well as forming a credit committee to manage and reduce our debtors book.”

She says that this has all borne fruit where, and they are now managing their cash flow on a monthly basis, have our receivables book under control, have been proactive in engaging with customers who have had difficulties through Covid-19 and pay their suppliers on a monthly basis. “This has brought far more structure to managing our liquidity and working capital requirements,” she says.

Working capital is a key weapon in the crisis liquidity arsenal, according to Megan, who says that cash conversion, understanding the intra month cash flow cycle, the quality of earnings and doing business at the right margins that turn into cash are also key tools.

A2X is a stock exchange committed to bringing real growth, choice and value to the South African marketplace.

Like the visionary CFOs featured, the team at A2X understand the importance of making the numbers work for you. Through lower exchange fees and narrower spreads, A2X is able to make significant savings available to the market. Have you empowered your shareholders with the opportunity to capture these benefits?

She recalls that when she first joined, EOH held R4 billion in debt, and there were no short- or long-term cash flow forecasts prepared in the business. “We didn’t understand who our cash cows were not who our cash bleeding businesses were and we had to quickly get on top of that.”

As a result, payment of suppliers moved from random daily actions to a monthly cycle and terms around creditors are now also better managed.

Lenders are a critical part of the journey when working through a liquidity process.

“Be it lenders or the investment community, it is important to look at key metrics and fundamentals. When we looked at the key metrics over prior years before the crisis happened, there were clear signs within the financials,” Megan says.

These included the increasing value of intangible assets, cash conversion coming down, and a ballooning debtors’ book – all warning signs that weren’t seen at the time.

“When I walked in, no cash flow forecasts were presented to the banks on whether lending could be paid back. Budgets were done on income statements, there was no balance sheet budget or cashflow budgets, that in itself tells you,” she says.

“I think that people can get over-enthused, like what happened at Tongaat and Steinhoff. People think these are magic darling companies that can do no wrong, and the things that normally get asked are overlooked due to soaring share price, growth through revenue and supposed profit.,” she says.

In the case of EOH, companies were being bought at lower P/E multiples that then rerated into the higher EOH P/E valuation thereby creating supposed value. The company was trading at a massive multiple and had a huge amount of equity value. So, lending was done on the back of share price “instead of looking at the sustainability level of debt and ability to pay it back”.

In a previous interview with CFO South Africa, Megan said, “One of the first challenges we encountered was that while the organisation was going through its growth phrase prompted by an aggressive acquisition driven model, there was a lack of focus on the balance sheet. So, we did a big clean up and there were significant impairments and write-offs that we took off at half-year [in April 2019].”

This is why she now advises, “Always go back to basics and look at the key metrics.”

“We were clear that trading ourselves out of debt was not an option. It would have to deleveraging through the sale of assets and we kept lenders and credit insurers close through the journey. We would meet lenders monthly and take them through the disposal process and debtors’ book and present cash flow forecasts to them as well,” Megan noted.

This was a relatively successful approach, and then the pandemic hit.

“Covid-19 knocked us back six to nine months in terms of closing the sales of two assets and thereby has made our deleverage process slower than we had hoped for. One of those sales was in the business-to-consumer environment, which dropped revenue significantly during lockdown but has since recovered to pre-Covid levels. There was a lot of uncertainty in the investment community with people holding on to cash and waiting to see if business would recover. That derailed us but we had supportive lenders who were sensitive to the situation and have worked with us as we close out on the sale of the remaining two assets that will result in a further significant deleverage of debt,” she admitted.

Fortunately, the hard work that had gone into managing EOH’s liquidity in the year before Covid-19 has borne fruit and stood EOH in good stead. “We were able to navigate the Covid-19 environment and actually saw the business continue to make strides in turning the business around with good cash generation and improvements in EBITDA for our financial year ended July 2020,” Megan concluded.