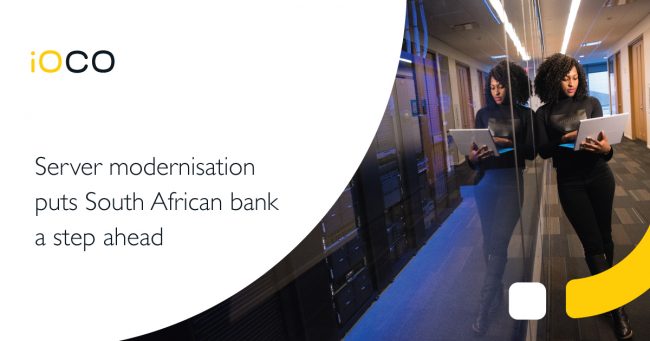 There’s more pressure than ever to do more. Be more. Go faster. Get it done.

This is especially true in the banking sector. Increasingly, there are calls to save money, downscale, right-size, modernise, and optimise. And, of course, to innovate.

When we think of innovation, we think of doing something brand new. Something novel. But innovation can also mean exploring opportunities that allow your organisation to change. It can mean preparing for a period of growth. And sometimes, innovation is about downscaling, right-sizing, modernising, and optimising.

So, what would happen if you went back to basics? This is exactly what one of South Africa’s top four banks did when they partnered with iOCO’s team of SQL Modernisation experts. Enabling them to save money, right-size, modernise and optimise, and of course, to innovate!

The bank spent three years implementing a separation programme from another entity. This meant that various services had to be replaced, particularly those related to operational and information technology.

In the process, the bank was left with a massive server estate and excessive licensing costs. This was further complicated by the fact that there existed no current directory of what servers were in its environment, or by whom they were owned.

It was aware that it had dormant servers, but not to what extent. What it did realise was that supporting all the technology was expensive, time-consuming, and put a strain on team resources. They were backing up servers that didn’t even need support.

While it is possible to streamline server environments, it’s not easily done. And when those servers manage other people’s money, the situation becomes even more complicated.

According to the experts, the only way to really understand the impact of switching off a server is to actually do it. But, in a banking environment, you risk creating massive disruptions and very unhappy customers. There’s also a good chance that the actions you take will affect other servers.

One way to combat this is to work with a team specialised in this particular area.

The bank brought in iOCO in March 2018. We were tasked with facilitating an infrastructure assessment process as part of the server modernisation journey, which unveiled huge consolidation opportunities.

The bank’s server architect said, “This environment was unlike anything we’ve encountered before; it was a different ballgame. The opportunities we discovered promised to deliver increased profitability and significant cost savings.”

The second phase of the bank’s server modernisation started in October 2018. Now that it knew what was in its environment, it also knew what had to be done.

The experience was daunting at first – it’s hard to hand over trust to an external partner.

“We believed our business had good processes in place, so it was hard not to resist change. But iOCO were patient, accommodating, and explained everything. We’ve learnt that if you bring consultants in to help, you need to take a step back and let them get on with it.”

And that’s exactly what we did. By the end of Phase 2, the bank’s server environment was two-thirds smaller. Everything was reduced, including cost, complexity, and risk of the estate. The bank can now manage its workload in a much more streamlined and standardised way. It’s also able to move the workload to the cloud.

So, how was the overall experience? “There were challenges, as expected with a project of this scale. At times, it didn’t feel like we were getting any traction and that there was no actual difference. But then they put the TVs up, and we watched the numbers drop every day. It was an eye-opener for those who don’t fully understand the work being done in the background. And it was amazing to show everyone what all the hard work was for.”

The environment is semi-automated and can be set up incredibly easily, along with simplified maintenance and support. The bank finally has the clean slate it’s wanted for years.

“It’s insane to think about how much money we’ve saved or what we’ve avoided. Now that we have control and ownership of our environment, we’re more focused and can respond faster. There’s no unnecessary firefighting and people now understand the importance of mapping their servers.”

There were also unintended benefits. “Since our operational team wasn’t involved much in the discovery phase, and as supporting requirements shrunk along with the estate, they got time back. Many of them upskilled themselves and got certifications in new areas. It’s so great to see because they never had time for this previously. Our business is now better prepared for the future; it can only get better from here.”

Changes in environments like this happen over time. They can’t be rushed, and they take huge commitment. So, for a bank to embark on a change like this, at this level, is a daring move that requires courage.

Their advice? “If I had to do this again, I’d step back from the start. Yes, it’s daunting. Yes, it’s uncomfortable giving ‘outsiders’ access to your critical systems. But sometimes you need an outsider’s perspective and experience, so you can improve. Give them space to do their investigation; the discovery phase is the longest, but it’s the most important. You need to know what you’re dealing with so you know how to fix it and how long it might take.”

Our advice? Finding a partner that is skilled in many disciplines and industries is key. When they’re proficient across multiple platforms, then you’re closer to reaching your goals, because it won’t matter which technology or processes you use.

Our banking partner is excited for the next phase, with iOCO as part of their team. “They never really felt like consultants; they just fit in. It’s nice looking back and walking this sometimes-frustrating journey together. We couldn’t have done it without each other – and that’s a pat on the back for both parties.”

What’s next for the bank? “Moving to a hybrid cloud environment and playing in a different field. We believe it will put us a step ahead.”