Home » Cycling » iOCO and pro cycling: the constant pursuit of excellence through teamwork 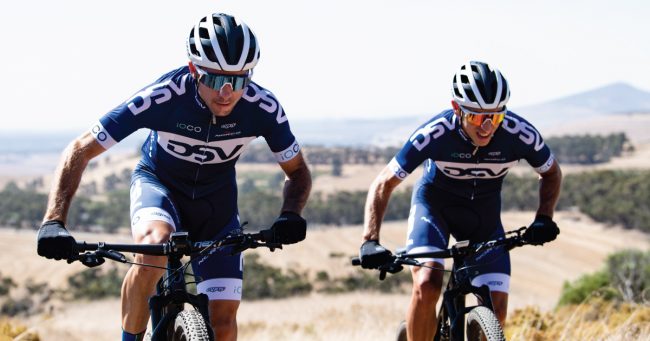 There’s a natural fit between technology companies and cycling, says Simon Just, Cluster Executive: Advisory, Solutions and Group Marketing at iOCO. “It’s such a technical sport, and it’s becoming increasingly data-driven. Constant data points are being fed from sensors on the bike and rider to teams, and information analysed to continuously improve performance.”

“Cycling is rivalling golf as the business sport of choice.  So much of the sport is about camaraderie and building relationships.  There’s something to be said for people getting fitter and stronger together while enjoying the outdoors,” he says.

In 2019, iOCO took over the co-sponsorship mantle of the DSV pro mountain-biking team, while pedigreed road racer Jacques Janse van Rensburg and young mountain-bike phenomenon Nicol Carstens joined up to become the duo of choice.

Pretoria-based Jacques is a well-known name in road cycling. The 33-year-old racer rode in Europe at World Tour level – the highest professional level, and the pinnacle of the sport – for eight years, including in the 2015 Tour de France and 2017 Giro d’Italia. He’s known for his climbing ability; the result of an astonishing power-to-weight ratio. After retiring from road racing in 2019, getting back to mountain biking is an interesting next step for Jacques, who raced mountain bikes as a youth, placing 54th in the Absa Cape Epic when he was just 19.

“I’m not entirely new to the format, and it was always my plan to tackle it again once I had retired from road racing.” says Jacques. “I’m also looking forward to riding with Nicol. Road racing is maybe more tactical, mountain biking more technical, and that’s how we’re going to need to learn from one another.”

Young gun Nicol, 25, earned his first podium finish in 2015, and since then has racked up an impressive set of results on the local circuit. For Nicol, joining the DSV and iOCO team is an opportunity to learn from one of SA’s most experienced cyclists, and possibly to teach him a thing or two. “The team has become known as the one to beat, so when I got an opportunity to race for them at the end of last year I grabbed it with both hands. It’s also a great chance to race and train with Jacques; he’s so experienced and I have a lot to learn. Our racing styles also complement each other; I think there’s a lot of potential in this team.”

Team manager Malcolm Lange agrees: “It’s never just about choosing two exceptional individuals; it’s about choosing the right team of two. Part of that is that they’ve got to complement each other and get on with each other – they’ve got to get through nine days of suffering together – but there also needs to be a competitive dynamic at play. Here we’ve got a ‘roadie’ – though Jacques has had some mountain-biking experience – and a talented mountain biker in Nicol. And as most cyclists will know, there’s a friendly rivalry between the two camps. So I’m hoping there’s going to be a constructive battle, with both sides wanting to prove something to the other.”

The intention was for the team to race the full gamut of events this year, including the Attakwas Extreme, Momentum Tankwa Trek, Absa Cape Epic, KAP sani2c, FNB Wines2Whales and the Cape Pioneer Trek, with the priority goal being winning the African Jersey at the Absa Cape Epic. But with ongoing national lockdown, and the cycling calendar constantly being rearranged due to safety and regulatory concerns, the emphasis for the moment is on training and enrolling in smaller events where possible, like the Barberton XCM MTB Challenge at the end of January.

It’s a frustrating time for cycling, with events being postponed and rearranged, but the team is making the most of it, as Jacques explains: “We’re trying to make the calendar work for us in order to give us as much training time – together and separately – as possible. We’re not compromising on our main priority, which is winning the African Jersey in the Epic, and podium finishes in the other events.”

“Cycling improves health, fosters progression, and rewards teamwork, dedication and commitment,” says Just. “The common denominator in the partnership between Jacques, Nicol and iOCO, is the constant pursuit of success underpinned by strong relationships, commitment and technical excellence.  It’s a partnership that makes sense.”