Home » Blogs » How to get the full benefits of testing automation 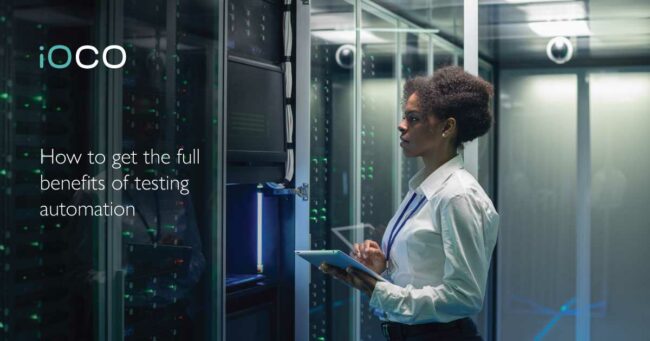 Testing has become the bottleneck

Products can’t go to market without being thoroughly tested, but the testing process can often be a bottleneck that prevents an organisation from realising the benefit of taking new features to clients. Limiting companies’ abilities to increase revenue generation and obtaining a competitive advantage.

Testing automation is the answer – but beware the pitfalls

Companies are used to having a testing phase just before their product goes into production. Here they will do a lot of functional testing of the application, as well as the crucial non-functional testing like performance and security. However, this testing occurs far too late and a shift left is required.

Shifting left means that your organisation can incorporate quality into your products right from the start, in the planning and design stages, by spending more time and focus on it from the get-go.

It’s obvious that the sooner you uncover any error – whether it’s user experience or performance ­­– the easier it is to fix, the quicker it is to fix and the lower the cost of fixing it.

If you uncover it at a later stage just before you go live, it can have huge repercussions, including redesigning or re-engineering your product. This creates significant resource wastage, as people who have moved on to other projects need to return and review work already done. This isn’t good for company morale either.

Most organisations’ response to this has been to begin implementing automated testing, but because it’s a relatively new territory, they need to start small. What often happens, however, is that some of these attempts at automation are successful, while others aren’t. If they aren’t successful, the organisations tend to abandon automated testing as a good idea that is impractical for their own environment. They start seeing test automation as an ever-elusive goal, as they aren’t achieving the value or success they expected.

How do you solve these problems?

The reality is that testing automation is similar to development – it needs to be architected and designed carefully in advance, and developed in modular fashion.

Once again, a shift left is required, so that quality control is built in early in the lifecycle, from the planning stages, so as to uncover defects as early as possible, and deal with them immediately.

This increases pipeline velocity, moving applications through faster and at a lower cost, with QA already baked in. The later you uncover a defect, the higher the cost on your development team, increasing overall production costs too.

Organisations need to take a broader view of testing automation. Automated testing should be viewed as automating any component of your testing or QA process that can make life easier for all team members, not only the testing team.

Why us – what we can do for you to solve these challenges?

Our premise is simple, effective and designed to deal with all the challenges of complexity and scale in automated testing. We believe that if you start your testing automation already aware of these challenges, and you prepare and design your automation implementation from the start correctly, you can successfully unlock all the value and benefits of testing automation.

We have years of experience implementing testing automation frameworks, so we’ve seen all of these challenges and problems. We can assist you in avoiding the many pitfalls by setting up the right structure and architecture for your test automation implementation. So that you won’t have to rework it halfway down the production path and be hit with a huge amount of extra work that isn’t actually adding value.

We are currently involved in many digital transformation initiatives, and are constantly adapting, evolving and researching to stay up to date with the latest developments in testing automation.

We take a personalised approach to each client and play a strong advisory role to ensure the solution is the right for your specific organisational needs. We don’t simply roll out the same blueprint every time.

How you benefit from working with iOCO

Contact iOCO to get a customised testing automation framework that solves your specific challenges, speeds up production, and reduces time wastage and production costs.