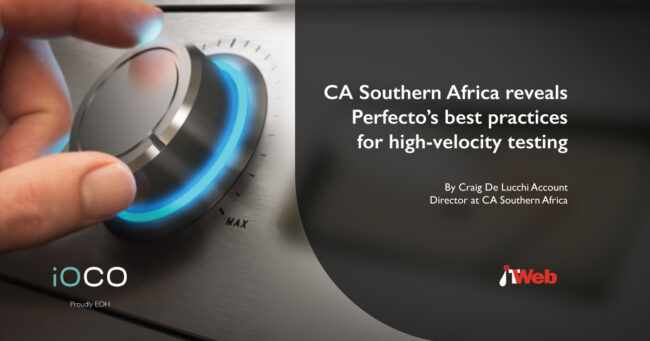 Speeding up software testing does not have to mean starting from scratch – the best way to accelerate it is by optimising current testing strategy. Perfecto is the key to achieving faster testing. This is according to Craig De Lucchi, Account Director, CA Southern Africa.

He confirms the following mini strategy from Perfecto helps deliver faster testing that enables companies to take their software testing to the next level.

“It’s important to keep test cases simple, re-usable and to automate features at the unit level. It will be easier for development teams to run tests at any time if you use good test management methods, store reliable data and keep clear test automation reports,” says De Lucchi.

“When a new feature is published, it will be tested across a variety of devices, browsers and operating systems to guarantee cross-browser and cross-platform compatibility. When it comes to apps, behaviour is monitored on multiple device-OS combinations. Every time a new device, browser version or operating system version is published – which happens often – parallel testing should be performed. Not only should the website or app work on newer releases, but also on existing browsers, devices and OSes. Any changes made to ensure their compatibility should not affect their behaviour,” advises De Lucchi.

“Regression testing can be performed in a variety of ways, although some are more time-consuming than others. To stay up with release cycles and the competition, you must reduce your regression testing time.”

Recommendations for speeding up regression testing include:

Create a strong CI/CD pipeline. For DevOps teams, a fully optimised CI/CD pipeline can make all the difference for faster testing. CI/CD makes complicated processes from development to delivery more efficient. It can reduce the number of escaped defects and can even accelerate delivery.

“But to get there, teams need to establish strong automation across the entire pipeline. Today, users expect better products, more often. These best practices can help DevOps teams to meet these expectations with faster testing, improved results and optimal software.”

De Lucchi says the bottom line is the same regardless of whether a company is just getting started with automation or well on its way; Perfecto’s expertise can take the business to the next level. “Perfecto will ensure you are well on your way to automated, accelerated testing with fewer defects and faster deliveries,” concludes De Lucchi.

Link to the original article